a short while ago I posted about the Double Spiral War Kickstarter that is currently still open and scheduled to finish on February the 1st. I like Sci Fi and feel this genre is underrepresented for Savage Worlds. For me it was clear I had to back it up. However I was still left with a lot of questions. I have never heard of Double Spiral War before and was not sure what to expect. Through the Kickstarter I contacted Jonathan Thompson from Battlefield Press and he graciously agreed to do an email Interview. Enjoy!

Thank you for agreeing to do an interview for my small blog, I appreciate it. Let´s start directly with the questions.

Chaosmeister: For those readers not familiar with you or your company can you give a short introduction please?

Jonathan: We came on the scene in 2000 as a d20 system publisher, with our first product launch in 2002, called Cityscape: City on the Nexus of the Omniverse. We followed that up with Pulp Fantasy for d20 Modern, Sherwood: The  Legend of Robin Hood, the Open Core System and most recently we released the setting Gaslight Victorian Fantasy.

Chaosmeister: Can you give us a quick overview of the setting? I understand It is based on trilogy of novels?

Jonathan: Yes, it is based on the trilogy by the late Warren C. Norwood.  It’s a love story, as seen through the eyes of many different characters and what they do with the love they have, regardless if its for a parent, a nation or a significant other. Its set  during the backdrop of a major intergalactic war.

Chaosmeister: Is this a hard Sci Fi Setting or Space Opera or something in between?

Jonathan: I would classify it as a little of both. I believe it has the elements of each in its story and its tech. I never really classified as one or the other, it has elements of Asimov and elements of E.E. Smith in the pages, plus Mr. Norwood  was a student of military history, and that can be seen in his description of the battles. Especially the ship battles, they look like they came right out of the Pacific Theater.

Chaosmeister: What makes it either for you?

Jonathan:  See above, I think I answered it there.

Chaosmeister: Can you tell me the most outstanding feature of this setting and/or the books to you?

Jonathan: The love story. A pair of lovers start out together in the book, and are lost to each other in the horrors of war. It’s a true Romeo and Juliet relationship. He is from one of the warring factions, while she is from the other. To make matters worse, her father is in charge of the war effort.  However, before I spoil anything maybe I should direct you to the book.

Chaosmeister: Since when are you working on a conversion of Double Spiral War?

Jonathan: That’s really a difficult question. When I was in high school, so many years ago, I first read this series and fell in love with it. I ran a game for a while using  Steve Jackson Games’ GURPS 3rd Edition. A couple of years ago I  decided that I wanted to track down Mr. Norwood and see if he would authorize a RPG setting based on his works. I failed to find him, as he had passed away, but his widow was all for it. Also allowing us the rights to reprint the original trilogy of novels.

Chaosmeister: Why did you choose Savage Worlds as a rule set for this setting?

Jonathan: One thing Savage Worlds seems to be lacking is a SciFi setting, I thought this setting would be perfect to fill that void.

Chaosmeister: Are there alien species in the game? If yes, can you give us a short run down about the most important ones?

Jonathan: There are a couple, the snake like Cloisean who hold an important resource, Methane. Their atmosphere is made out of it and interestingly enough it’s the primary fuel for starships. They play a vital role in fueling the war effort, so to speak. Another one would be the humanoid Oinaise. They are a race of merchants, and because they have one of the largest ship fleets they are constantly assaulted by diplomats of the two sides to make a decision about which side they will ally with, but they wish to remain neutral in the conflict. That being said, I think all the races in the setting are important in one way or another, just depends on where you stand.

Chaosmeister: On which Side/Faction will the players act? Is it predetermined or is this an open setting?

Jonathan: It is pretty open, characters can be military, civilian or whatever they want. They can work for one side or the other, be merchants, mercenaries or treasure seekers.

Chaosmeister: Any new equipment we can look forward too?

Jonathan: There are a couple, but they are closer to being retro-tech than something far future.

Chaosmeister: What about Space Ships, we can`t have Sci Fi without them.

Jonathan: All the spaceships present in the trilogy will make some kind of appearance in the RPG setting

Chaosmeister: Are there any challenges you face translating this universe into Savage Worlds rules?

Jonathan: There are several, primarily in detailing the starships. That was the most difficult to do.

Chaosmeister: Did you create any new rules specifically for this setting?

Jonathan: No, but I did adapt some from other sources (with those publishers permission).

Chaosmeister: How big will the book be and can you give as an overview of the contents like plot point campaigns, one sheets, GM section and the like?

Jonathan: It hasn’t gone to layout yet, but probably will be within the 150 page range.

Chaosmeister: How far along the writing process are you?

Jonathan: I still have to do the GM section and the plot point campaign.

Chaosmeister: Why did you choose Kickstarter as a means of additional funding? What exactly is funded?

Jonathan: I have had some success with kickstarter in the past, so I decided to continue to use what was working for me.  What is being funded is additional art for the interior of the book. Currently we don’t have enough.

Chaosmeister: Are there any future plans regarding the franchise?

Jonathan: We have plans to expand the universe through novels and RPG sourcebooks. This new content will be the first of its kind for this setting, as the originally trilogy was the only thing in the setting that Mr. Norwood wrote, and I think it’s a rich setting with lots of wiggle room.

Chaosmeister: Any final words for the readers?

Jonathan: Just that we appreciate your believe in our project, and I hope you enjoy it when its finally released. Of course success or failure of the project would probably determine the actual release date. However as it stands I hope to have it out to the backers by the end of April.

Chaosmeister: Thank you very much for your time!

For more Information about the setting you can read the novels as suggested by Jonathan. The trilogy is available in one electronic book from Battlefield Press on RPGNow in epub/nook, PDF and Kindle formats. The novels are also part of the highest level Kickstarter rewards, so if you pitch in  you will not only receive the setting book but also the novels it is based on. And that is a really good deal. As of this writing the goal of 500 $ has been reached, but you can and should still pledge if you are interested in the book. More money means better art for everyone.

Did you like the Interview? Want to know more? Let me know in the comments! Read you soon. 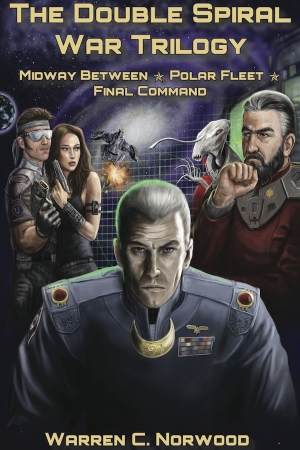 Welcome to the Chaosmeister Games website. I hope you find my articles and games useful and entertaining. Would love to hear from you either way!